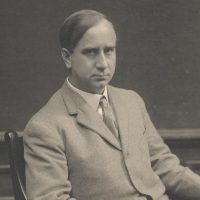 Charles Webster Hawthorne (1872-1930), one of America’s most creative and inspiring teachers, grew up in Maine where his father was a sea captain, and lived much of his life in Provincetown, Massachusetts. In 1894, Hawthorne moved to New York City and began his studies at the Art Students League. Later, he studied with Chase and helped set up the New York School of Art. Following studies in Europe, Hawthorne started the Cape Cod School of Art in Massachusetts, dedicated to outdoor figure painting. He urged students to render broad areas of color, to paint freely in an attempt to capture nature “as if paint had just been invented.” Hawthorne became the leading figure in Provincetown.

Frequently described as an impressionist, Hawthorne was exceedingly diversified in his approach to painting. Crimson Roses belongs to Hawthorne’s more fanciful genre of interior scenes, which reveal the influence of the “intimate” mode in American painting. In this work, Hawthorne focused on a singular female subject who has no knowledge of the viewer’s presence as she arranges her flowers. The reflections in the mirror is another device that reveals French and American expatriate influences. Always a fine draftsman, Hawthorne demonstrates his willingness to exploit bright color but relegates this to a unified tonal balance.