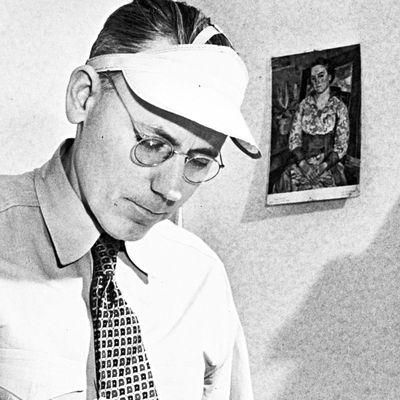 Charles Heaney was a printmaker and painter in Oregon for nearly sixty years. He lived most of his life in Portland, but he based his art on his perceptions of nearly every region in the state. Known for his prints and paintings of the Oregon interior and Nevada, he also portrayed the neighborhoods near his home in northeast Portland and the demolitions of downtown Portland buildings in the 1940s.
Heaney was the youngest of eight children of John Toner Heaney, an immigrant from Ireland, and Elizabeth Ehricke Heaney, who had come to America from Germany. The family settled in an Irish community near Oconto Falls, Wisconsin, where Charles Heaney was born in 1897. Family snapshots taken in the early twentieth century record the vernacular architecture of Oconto County, a landscape that anticipates the picturesque houses, sheds, and storefronts that would become iconic in Heaney’s art. Traveling to Oregon by train in 1913, when he was fifteen years old, introduced him to the other subjects that would interest him for a lifetime: the mountains, endless highways, abandoned mines, and isolated trees of the inner American West.

Heaney settled with his mother and sister in Portland. He did not complete high school but immediately went to work for the F.C. Stettler Company, where he operated box-making machines. In 1916, he apprenticed at the Brandenburg Engraving Company, where he learned to engrave flatware and trophies, a skill that supported him for much of his life and provided the basis for his work as a printmaking artist. The company’s owner, George O. Brandenburg, recommended that Heaney enroll in classes at the Portland Art Museum School (now the Pacific Northwest College of Art).

From 1917 until well into the 1920s, Heaney studied intermittently at the school. One of his primary instructors was legendary painter Harry Wentz, who befriended and inspired him. A fellow student was Kyuzo Furuya who, Heaney recalled, goaded him into taking himself seriously as an artist. But Heaney’s deepest friendship was with Clayton Sumner (C.S.) Price, an artist twenty-three years Heaney’s senior who settled in Portland in 1929 and who would become a pioneering figure in Oregon modern painting. Heaney admired and emulated Price’s dedication to art-making and found in the older man an important companion.

For three years, beginning in 1929, Heaney was employed by the Oregon State Motor Association, where George Brandenburg was the manager. He worked in the sign department and traveled throughout the state to identify locations for and to install directional highway signs. Sketches made on those forays and on later summer trips became the basis of some of Heaney’s artwork.

During the Depression, Heaney expanded his skills from printmaking to painting. He was employed as an easel painter for the Oregon Federal Art Project of the Works Progress Administration, and in 1937-1939 completed sixty-four paintings and nine woodcut editions. The most famous of these works is The Mountain (1937; oil on canvas), painted for Timberline Lodge and on view there. It is a monumental work, inspired by Cezanne, Furuya, and Price.

Heaney’s prints of the 1920s and 1930s were mostly woodcuts, a technique he learned from Catherine DeWitt MacKenzie, a fellow student at the Museum School. In the 1930s, he experimented with etchings with his friend William McIlwraith and studied intaglio processes with William Givler at the Museum School. Heaney’s later prints are increasingly abstract, experimental works in etching and aquatint. Some are images of fossils, a subject Heaney also explored in painting. In the 1940s, he created mixed media “fossils,” combining plaster relief, painting, carving, and imprints of actual fossils. He considered these irregularly shaped wall pieces to be his most original work.

Drawing on Romanticism (including the paintings of Albert Pinkham Ryder that he saw at the Portland Art Museum), American Regionalism, European and American Modernism, and the art of his friends in the Pacific Northwest (especially Price), Heaney’s work appeals to many audiences. His poetic temperament, combination of depiction and abstraction, tonal richness in prints and color subtlety in painting, and sense for light and atmospheric effect all contribute to a body of work that is notable for its expressive mood, which tends to be meditative, recollective, and at times melancholic.

Heaney never married but was close to his widowed mother and his sister. While he was not primarily a figure painter, in his urban and rural scenes he frequently depicted a lone woman as a contemplative presence and meditative observer.
Heaney exhibited his art widely and is represented in many public collections, among them the Portland Art Museum, Seattle Art Museum, Smithsonian American Art Museum, Tacoma Art Museum, Jordan Schnitzer Museum of Art (University of Oregon), Hallie Ford Museum of Art (Willamette University), Oregon Historical Society, and Reed College.