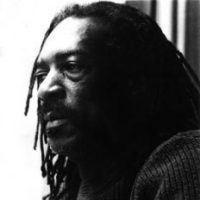 Charles Searles was born in Philadelphia. He moved to New York in 1978. Searles received his undergraduate education at the Parsons School of Design, graduating with honors. He also studied at the Philadelphia College of Art.

Searles received his first public commission for the interior mural “Celebration” at the William H. Green Federal Building in Philadelphia. Seven more public commissions followed, the most recent in 2004 by the Delaware River Port Authority for five painted metal sculptures. He has received numerous awards and grants including the Pollack-Krasner Foundation Award, Creative Arts Project (CAPS) and National Endowment for the Arts among many others. A world traveler, he has exhibited in Europe, Africa, and the Caribbean. Searles has served on many public art panels, taught art workshops and as professor at Pratt University. His former teaching experiences include Jersey City State College, Bloomfield College, and the University of The Arts in Philadelphia, where he taught for nineteen years.

Charles Searles is known for his dynamic and colorful sculptures. He derives inspiration from movement and African dance. Whether expressed two dimensionally, with paint on a wall or canvas or in three dimensions, of wood or bronze, Searles’ animated compositions communicate with the individual, while encompassing the hemisphere. The human factor is always present, whether in a two dimensional representation or an abstract form that seems about to transition into an individual: never at rest, always in motion, intricate rhythms evolve into works of art.