Charley Kinney was born in 1906, on Toller Hollow in Lewis County, Kentucky. Before 1912, his family moved less than a mile up the valley to where Charley spent the rest of his life. Born with “pectus excavatum” (an indented rib cage), he learned to innovate at an early age, to compensate for his natural lack of upper body strength. He showed artistic interest during his three or four years of schooling, preferring to draw rather than study. Spending his entire life virtually in the same spot, Kinney developed an intimate knowledge of his surroundings and an acute understanding of the natural environment.

Charley was involved creatively throughout his life, playing fiddle, passing down and embellishing local lore, making baskets and clay sculpture. Locally he was known by different audiences for a variety of accomplishments: for a period of time in mid-life he was best known for his music, and for the eerie dancing puppets he constructed from scrap material that accompanied him to local fairs and public events. It was painting, taken up later in life, however, that gained him widest national recognition. Though he may have begun to paint as early as the 1950s, his work flourished from the late 1970’s until his death in 1991. Kinney’s very personal style of painting is instantly recognizable, as are many of his subjects, which are wide ranging but include “haints” (ghosts), devils, strange phenomena and scenes of yesteryear. Kinney’s work has been included in exhibitions of folk art, regionally in the 1970s and nationally since the 1980s, has been toured extensively and is part of many major museum collections. 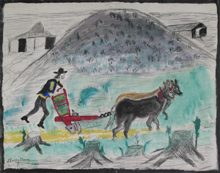