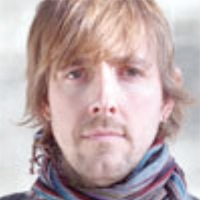 Chris Natrop is an artist based in Los Angeles, California. While known primarily as an installation-artist that utilizes hand-cut paper, Natrop has begun integrating a variety of other material into his work. Transparent plastics, video projection and multi-channel audio are often employed alongside works of intricate, hand-cut paper to create fully immersive environments within gallery and museum spaces. The viewer is en­courag­ed to enter these room-sized installations to directly experience the realm the artist has set up where elements of light, shadow and form coalesce into a fully unified world. Most of the individual components are hand-cut in the artist’s studio and then custom-arranged for a particular exhibition space. For his works on paper, each piece is spontaneously created without the use of patterns or pre-drawing-this stream-of-consciousness approach is, in fact, the crux of the artist’s practice. Graphic silhouettes emerge from a meditative-channeling activated by the repetitive practice of cutting paper. Natrop works on enormous sheets of Lenox 100 drawing paper stretched out vertically on his studio wall. Wielding a standard utility knife, he spontaneously cuts away at the paper to create a hybrid of landscape imagery. Natrop’s free-form process of “knife drawing” reveals the negative space by removing the emptiness in-between forms. Often an amalgam of things previously observed, the graphic nature of the work becomes a freeze-frame of Natrop’s own direct surroundings revealing the artist’s particular sense of place. In many cases one feature will be multiplied over and over, re­sulting in a dense layering of a single element. A multiplicity of water droplets, crawling vines or cracks in the pavement may be rendered and reworked within each installation. Emotional forces further contextualize the work within this structure: feelings of anticipation, apprehension, dis­orienta­tion or joyfulness often encapsulate the work’s inherently myopic narrative. This fusion between internal, emotional space and the ex­ternal, physical landscape continue to be the framework for much of Natrop’s practice.