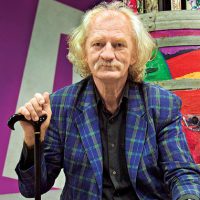 Expressionist painter Cile Marinkovic is one of Serbia’s most celebrated living artists. His work resembles the early twentieth century’s German expressionists in its emphasis on distinct lines and bold colors, as well as in its distinct sense of claustrophobia and anxiety, but Marinkovic provides an updated take on that tradition. In The Party, (which the artist donated to the United States embassy in Belgrade) Marinkovic’s figures are gathered together in what seems to be a crowded space. Moreover, the figures are all close to the picture plane, making them uncomfortably close to the viewer as well. The scene is at once festive and disquieting, while beautiful and discordant. Marinkovic has masterfully captured the tensions inherent in modern social life.

Marinkovic was born in Belgrade, where he went on to study at the Academy of Fine Arts. He has exhibited extensively around Europe and the United States and has received numerous prestigious awards, including an award for Great Contribution to Serbian Art and Culture in 2011. Marinkovic lives and works in Paris, France.