From North Carolina, Claude Howell was a painter in realist but not photo-real style of marine genre, especially fishermen and docks, and expansive seascapes. Before beginning to work, he made many sketches and notes about the light, color, and subjects.

Howell was fully devoted to fine art painting and took odd jobs to support that interest. HIs only formal education was highschool, but because of the regard in which he was held, he was hired to be head of the Art Department at UNC-Wilmington when it became a four-year college. He taught there for twenty-one years before retiring in 1981.

Exhibition venues include The Corcoran Gallery, Metropolitan Museum of Art, as well as Wake Forest University. He was a lifelong supporter of the arts in North Carolina—teaching, encouraging, and collecting. 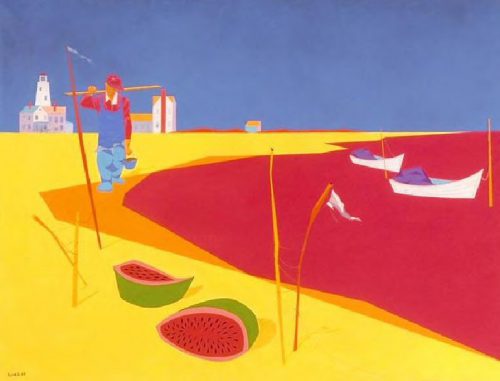