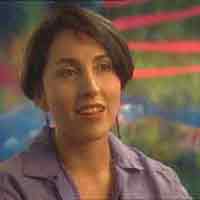 Working with fabric since 1994, Ms. Comay is concerned with using fabric in a painterly manner and with depicting form and substance three dimensionally in a minimalist way, thus creating a new lexicon that bridges the world of textiles with the world of fine art and sculpture.

In 2004, she was co-curator of the Faultline Studio Artists exhibit at the Museo de America in Madrid, Spain. Ms. Comay has also exhibited her textiles in France, Japan, Pakistan, and throughout the United States. She received an Artist-In-Residence fellowship from Yosemite Renaissance, Yosemite National Park and was featured in the PBS Video “Woman’s Work: Making Quilts – Creating Art”. Her work has been published in the book “America from the Heart – Quilters Remember September 11, 2001?, in the magazine Quilting Quarterly, Fall 2002, the Contra Costa Times Knight Ridder Newspaper, September 2002, and in the Roots Racism: Ignorance & Fear, catalog published by the Art in the Embassies Program, U.S. State Department, documenting a traveling exhibit on view at the American Embassy in Islamabad, Pakistan.