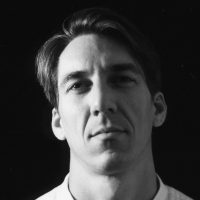 Clayton Merrell is a painter whose ravishingly luminous and spatially contradictory work visualizes aspects of our current global ecological situation by re-imagining and updating images of the sublime landscape. His paintings are lush and grandiose like 19th century landscape paintings and 20th century color-field paintings, but also full of tiny delicate details that bring a quality of fragility to the work. He often combines multiple styles of representation in a single painting, creating visual dualities and contradictions in order to talk about the clashes between human cultures and natural systems.

Merrell grew up in Pittsburgh, PA, and Puerto Ordaz, Venezuela. He studied painting and printmaking at Brigham Young University and the Yale School of Art, where he earned an MFA in 1995. He received a Fulbright Grant to Oaxaca, Mexico in 1996-97. His work is exhibited and collected widely, with recent exhibitions at: The American Embassy in Belmopan, Belize; Slow Gallery, Chicago; Concept Gallery, Pittsburgh PA; The Roswell Museum and Art Center, Roswell NM; the A+D Gallery, Chicago; and the Chautauqua Institution, Chautauqua NY. He was the 2005 Artist of the Year at The Pittsburgh Center for the Arts, Pittsburgh PA. He has received awards and grants from the Pro-Arts Foundation, Skowhegan, the Millay Colony for the Arts, the Blue Mountain Center, the Vermont Studio Center, Artists Image Resource, and the Center for the Arts in Society. During 2004-05 he was a fellow at the Roswell Artist-In-Residence Foundation. He is currently an Associate Professor of Art at Carnegie Mellon University in Pittsburgh PA.