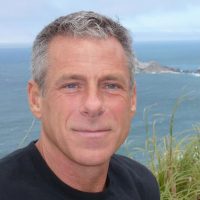 Oklahoma-born watercolorist F. Cole Wolford started painting later in life with no formal art training, following a career as an internal medicine specialist primarily treating HIV patients. He earned a Bachelor of Science degree in 1980 from Virginia Tech and a Doctor of Medicine degree from Eastern Virginia Medical College. His paintings reflect a balance between surgical precision and a sense of freedom that finds beauty in unconventional vantage points. Intrigued by color and the way that value changes can transform a shape or a shadow from a flat plane into three dimensions, Wolford appreciates “being able to create things as I want them to be, rather than being forced to take them as they are.”

Vizcaya (2010) and 26th and Federal (2010) are two of Wolford’s earlier works depicting the intense colors of his adopted home state of Florida. Operation Party (2014) – a street scene from Manhattan – served as the centerpiece of his “Shadow Journeys” exhibit.