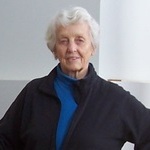 Constance Bergfors was born in Quincy, MA, and educated at Dana Hall School and Smith College, where while majoring in zoology, she was introduced to drawing. Her interest in art was born, and then nurtured in Washington, D.C. at the Corcoran School of Art where she studied painting and drawing. Her husband’s Foreign Service assignment took the family to Italy, where she continued her studies at the Accademia di Belle Arte in Palermo, Naples and Rome. It was in Italy that she had her first gallery exhibitions in Naples and Rome.

Three years in Conakry, Guinea, West Africa and one year in the Var, Southern France refined her early paintings into floating color shapes with movement and relationships similar to her present sculpture. She also started a small collection of African sculpture, whose structure and vitality seem to have been felt, considering some of the images seen in her own future wood carvings.

Returning to the United States, she settled down in Cabin John, Maryland. Her first fragmented paintings were exhibited at Gallery 10, Washington, D.C. in 1976. The United States Government commissioned six works for one of it’s agencies in 1978. The works were very sculptural with 2, 3, 4, or more parts to each piece. Canvas was stretched on irregular shaped stretchers and painted with closely related acrylic colors. The floating color shapes had come out of early canvases and become relief paintings. During a second two-year stay in Rome, Italy, she had a successful showing of her fragmented paintings at the Galleria Editalia in 1980. 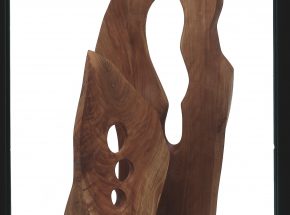