Constance Stuart Larrabee was a photographer best known for images of South Africa. She was born in England, raised in Pretoria, South Africa; studied photography in London (1933-1935) and at the Bavarian State Institute for Photography in Munich (1935-1936), where she was influenced by the avant-garde work of the Bauhaus school. Returning to South Africa, Larrabee set up a studio and photographed many leading cultural and political figures of the period. During World War II she served as South Africa’s first woman war correspondent, and in 1950 she married an American and moved to the United States.

Larrabee began photographing the peoples of South Africa in the late 1930s. She published extensively, including a portfolio produced for the book, Cry, the Beloved Country, by Alan Paton (New York: C. Scribner’s Sons, 1948). Her work has appeared in exhibits throughout the world, including the following: “The Lovedu” in Pretoria, 1947; “The Family Man” at the Museum of Modern Art, 1955; “Tribal Photographs” at the Corcoran Art Gallery, 1984; and “Go Well, My Child” at the National Museum of African Art (NMAfA), 1986. 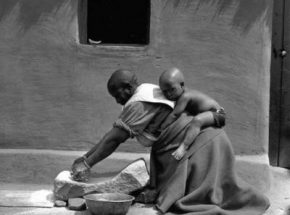