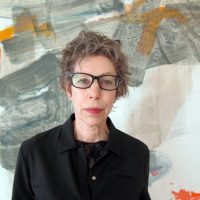 Cora Cohen is an abstract artist who lives and works in New York and, on occasion, the Rhine region of Germany. She has had over thirty-five solo exhibitions in the States and Europe. Altered X Rays at the Field Institute Hombroich, Museum Insel Hombroich, Neuss, 2011, and Works on Paper at d.m. allison art, Houston, Texas, 2012 are among her recent solo exhibitions. In the past several years, she has received awards from the Edward F. Albee Foundation, The Marie Walsh Sharpe Foundation Space Program, and the Gottlieb Foundation. In the past she has received awards from the National Endowment for the Arts, the Pollock Krasner Foundation, and The New York Foundation for the Arts.

Cora Cohen was born in 1943 in New York City. She studied at Bennington College (with Paul Feeley, B. A. 1964 and Richard Haas, M. A. 1972.) Her works are in the collections of The Museum of Modern Art, New York; the Swedish State Art Council, Stockholm; The Weatherspoon Art Museum, Greensboro; and Yale University, New Haven. In 1996, a mid-career survey exhibition, Cora Cohen: paintings and altered x rays 1983-1996, initiated by the Sarah Moody Gallery of Art, University of Alabama, Tuscaloosa, Alabama traveled to the Joslyn Art Museum, Omaha, Nebraska. Cohen’s paintings have been included in Invitational Exhibition of Visual Arts at the American Academy of Arts and Letters, New York in 1987 and 2012, and in 2012 her painting, Curtain, was selected for purchase. Cohen has taught and/or lectured at a number of institutions including New York University, the New York Studio School, Maryland Institute College of Art, The School of the Art Institute of Chicago, Tyler School of Art, and Columbia University.?

Cohen’s paintings are mediations the syllabary, logograms, and pictograms of Linear B script. Irenic and non-programatic, they derive rhythm and basis from the script, and the narratives of its discovery.