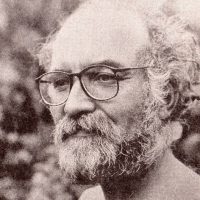 Cristóbal Ruiz, a painter of sublimely simple images, received his early art training in Córdoba with Rafael Romero Barros and in Madrid with Alejandro Ferrant and the Escuela Superior de Bellas Artes de San Ferdando. From 1902 to 1912, he lived in Paris and studies with Jean-Pail Laurens at the Académie Julian, where he met Modigliani and other avant-garde artists. When he returned to Spain, Ruiz taught at the Escuela de Artes y Oficios in Ubeda and in Madrid at the Escuela Superior de Pintura, Escultura y Grabado. Also in Madrid, he submitted a painting, La Cancha, to the Exposición Nacional de Bellas Artes in 1917 and participated in the Exposición de las Sociedad de Artistas Ibericos in 1925 and in exhibition at the Museo de Arte Moderno in 1926. He won a prize that enabled him to travel to London, where he worked for a time. In 1933, he participated in the Exposición de Arte Revolucionario at the Ateneo in Madrid. During the Spanish Civil War, h sought refuge first in Paris and in New York, and later, from 1938 to 1960, he lived in Puerto Rico, where he continued to paint. Several generations of Puerto Rican artists were influenced by the decades he spent as a teacher, first at the Polytechnic Institute in San Germán and from 1945 until 1960 as an instructor in drawing and painting at the University of Puerto Rico at Río Piedras, where he was artist in residence.