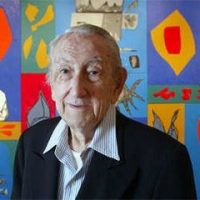 Cundo was born in September, 1914. He began High School when he was 13 years old, and shortly afterwards he attended the Academy of Fine Arts. The painter said: “A relative of mine, who watched my drawings, took me to the San Alejandro Academy, so I would learn how to draw. But I left it very soon, I did not like the teaching.

In 1934 he began studying Diplomatic Law in the University of Havana -to satisfy his family –but the closing of the institution allowed him to graduate in 1941. Before, he had exhibited with four young artists in Albear Park, in 1937 and had traveled abroad a year after.

He said: “In 1938 I went to Mexico to study drawing. There I got very impressed by Mexican painting and its themes.” When he returned to Havana he developed a numerous activities: “In those years I studied, worked and painted. My first individual formal exhibition was in the Havana Lyceum, in 1942. Then I felt quite influenced by the greatest Cuban painters from previous generation: Amelia Peláez, Carlos Enríquez and others” –explained the artist. After several trips to the United States of America, and Haiti, he traveled to the Old Continent:: “Later on, in the early 1950´s, I went to Europe to see its museums. I spent nine months in Sapain, Italy and France, I was already influenced for the modern in itself, but there I got impressed by Spanish masters, mainly Velázquez.

In 1958, Bermúdez was abroad aiming to exhibit his works. He returned in 1960, but his thought and attitudes took him to isolate from political environment and to concentrate on his artistic ongoing, preparing exhibitions in Lima and Santiago de Chile. He left Cuba in 1967. Then he settled in Washington and later in San Juan, Puerto Rico, and even later in Florida, where he died.

He has achieved international acknowledgement, two of his works belong to the collection of the Museum of Modern Art (MOMA), New York. In 1956 he won the Prize from the International Exhibition of the Caribbean, sponsored by the Museum of Fine Arts of Houston, Texas. In 1973 he was awarded in the exhibition Tribute to Picasso, held in Washington. He has participated in the Biennial of Venice and in the Biennial of Sao Paulo.