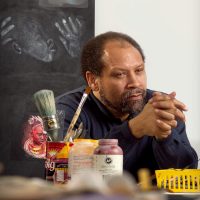 As an artist it became clear to me early on that making art served a number of roles in my life. First, art allowed me to demonstrate my talent and uniqueness to the public. Secondly, it allowed me to engage in a cultural and intellectual dialogue concerning the issues of the day. Finally, and perhaps most importantly, is that the making of art is a self-reflective activity. This aspect of art making, conceivably, is the most important because the significance of an artist’s career and the value of their work is never guaranteed.

The work included in this exhibition covers almost twenty years of my creative activity. I was asked recently why do I make art and my response was, “It is the only faith that I have.” What I meant by that remark was that my creative life as an artist allows me to have a way of creating and expressing value through a language that possesses elements of sacredness and worship. Embodied in my paintings, printmaking and drawings is an exercise of self-consciousness and lived experiences.

My printmaking work began in earnest with a piece titled Ovuh the Skillet in 1999 and has evolved over the years to represent a visual response and critique of daily life. Although I am not known primarily as a painter, painting has been central to my work as an artist. I have found that painting and printmaking are closely related and that they engage both color and texture as central elements. Drawing, which is at the foundation of all of my work, is the language of the mind, body and heart brought together in perfect harmony. The act of drawing is about power and grace, mark making and erasure. The obvious and the subtle are all expressed in the act of mark making. These are the foundations of my work as an artist; however, the narrative as a driving force has always been paramount. My story is our story.

Curlee Raven Holton, The David M. and Linda Roth Professor of Art, is a printmaker and painter whose work has been exhibited professionally for over twenty-five years in more than thirty one-person shows and over eighty group shows. His exhibitions have included prestigious national and international venues such as Egypt’s 7th International Biennale, Taller de arts Plasticas Rufino Tamayo in Oaxaca, Mexico, the Cleveland Museum of Art, and the Whitney Museum of American Art.

Holton has been an artist in residence at museums, colleges, and universities. He has presented over seventy public lectures on the subjects of his work, African American art, and contemporary printmaking. He has written numerous articles and essays on art and artists that have been published in catalogues and journals.

Holton earned his M.F.A. with honors from Kent State University and his B.F.A. from the Cleveland Institute of Fine Arts in Drawing and Printmaking. Since 1991 he has taught Printmaking and African American Art History at Lafayette College in Easton, Pennsylvania and is also the founding director of the Experimental Printmaking Institute.

“The goal of art is to illuminate.”
Joseph Albers 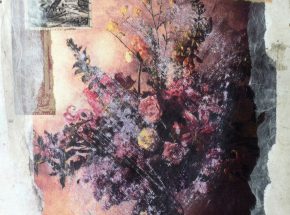