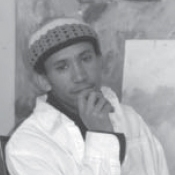 Daniel Taye grew up closely involved with the Ethiopian Orthodox Church and eventually became a deacon. The church played an important role in his education and was the cornerstone for many of his life’s lessons. Fascinated by its power, he asserts that he reads the Bible often.

Mr. Taye extended his devotion to the realm of visual arts when he entered the Addis Ababa School of Fine Arts in the late 1980s. He has seen his work exhibited in Ethiopia as well as several major cities in the U.S. He currently lives in Washington, D.C., where he not only cultivates his passion for painting but also hones his skills as a musician and prose writer. Macush Ethiopian Art represents Mr. Taye’s arts.