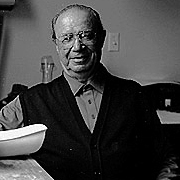 Born in the village of Rona de Jos, Romania in 1920, David E. Davis came to America with his family at the age of fourteen. He received a full scholarship to the Cleveland School of Art (now Cleveland Institute of Art), which he attended from 1939 to 1941, interrupting his education to serve in the US Armed Forces from 1942-1946. Upon his return, he resumed his studies and earned a BFA in 1948. In 1961, he received an MFA from Case Western Reserve University in Cleveland. Davis began his career in the corporate sector, first as vice-president for the Creative Department at American Greetings Corporation, then as vice-president for Electro General Plastics in Cleveland. In 1967, he set up a metal working studio and began to devote himself to sculpture on a full time basis. Since the early 1970s, his work has been included in twenty solo shows and numerous group exhibitions ranging from venues at the Cleveland Museum of Art and the Butler Institute of American Art, to galleries and museums in Florida, New York, Chicago, and Bucharest, Romania. Davis completed twenty-six major public commissions in Ohio and Florida, and his work is in many museum collections such as the Israel Museum, John and Mable Ringling Museum of Art, the Cleveland Museum of Art, and significant corporate and private collections. On November 13, 2003, having just completed a monumental commission for the Free Clinic of Greater Cleveland, Davis passed away after a two-month battle with cancer.

Davis operated a studio in Cleveland and was an active supporter of the visual arts in the community, as well as in Sarasota where he and his wife, Bernice Sapirstein Davis, built a winter home. Founders of The Sculpture Center and the Artists Archives of the Western Reserve (both of which are located in a new facility next to his studio), the Davises have shown a deep commitment to the advancement and preservation of the cultural heritage of the region. Their newly founded Bernice and David E. Davis Art Foundation will collaborate with these and other organizations to support the arts, and will offer educational programming to the community using the resources and facilities in David Davis’s studio.