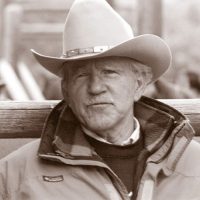 In 1985, David was inducted into the CAA and also notified that his painting “Chippawa Hunter” was the “Purchase Award” at the Buffalo Bill Historical Museum in Cody, Wyoming. The year 1986 marked his first place award for Region 11 in the Arts for the Parks competition. David was honored in 1990 with the “Western Heritage Award” given by Favell Museum of Kalamath Falls, Oregon, for excellence in portraying the West, past and present, in watercolors. His painting “Heading Out” appears in The West, A Treasure of Art and Literature by Watkins & Watkins.

A graduate of Chouinard Art Institute in Los Angeles, David worked on Lady and the Tramp feature Disney film, taught art in the Los Angeles Unified School District and joined other artists in many invitational art shows and galleries. On his first invitation to the National Cowboy Hall of Fame show he won the prestigious Silver Medal for his watercolor, “Story Teller.”

In 1995 David was contacted by National Geographic to help complete a film project for children. His paintings were used to depict the life of mountain men. In the summer of 2004, the U.S. Embassy asked to show one of David’s paintings in Ulaanbaatar, Mongolia with the “Arts in the Embassies Program,” and his “Forewarned” painting was purchased by the Museum of Western Art in Kerrville, Texas. In 2006, David was selected as one of the top 100 artists in the 2006 Arts for the Parks Show in Jackson, Wyoming.

Over the past 20 years, David has won the CAA Gold and Silver medals numerous times. “Watercolor media is an exciting one, particularly in the beginning stages when painting ‘wet into wet.’ One has less control and therefore it is surprising and exciting to see the colors intermingle,” says David.

He and his wife, Jean, make their home in the mountains of northern California.