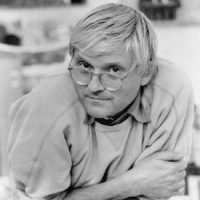 Born in Bradford, England, Hockney is associated with the unique landscape subject matter and sun-drenched color palette he devised in Los Angeles, where he lived and worked from 1963 to 2005. He first achieved international renown in the early 1960s for his drawing, printmaking, and painting, which were associated with the Pop Art movement that derived its subject matter and name from references to popular culture.

In the early 1980s, Hockney began to produce photocollages, which he called “joiners,” first of Polaroid prints and later of 35mm, commercially processed color prints. His subject matter ranges from portraiture to still life, his style from representation to abstraction. In addition to photography, Hockney’s diverse media include printmaking, painting, drawing, filmmaking, and theater design.