Painting the Southwest of Our Dreams
The Art of David Jonason

Combining a keenly observant eye, the professional experience of 25 years as one of America’s top illustrators, and inspiration drawn from a cavalcade of 20th-century art movements and artists, David Jonason achieves a uniquely personal vision through his iconic, vividly dreamlike oil paintings of the American Southwest.

Jonason fills his palette with the intense natural colors of the region, distilled to their very essence: fiery reds, deep crystalline blues, emerald greens, earth tones so rich you can almost feel the rocks and soil beneath your feet. He portrays the Southwestern landscape with a realist’s eye, rendering it with a clarity that makes his paintings remarkably real, uncannily present.

Yet, he also filters those images through an artistic sensibility steeped in his love and appreciation for Cubism, which broke up and rearranged familiar objects to portray them with fresh new insight; Futurism, which instilled art with the energy and drive of the Modern Age; Precisionism, which rendered its subjects in precise, simplified form; and Art Deco, which imbued everything from architecture to fashion, jewelry to art, with graceful style and elegance. “I’ve always liked images that are stylized and streamlined,” he explains.

Naturally, his love of the Southwest also inevitably attracted him to works by the Taos School, artists from across Europe and America who, in the early 20th century, were attracted to and inspired by the light, landforms, and native arts of northern New Mexico. Artists like Andrew Dasburg, Ernest Blumenschein, Nicolai Fechin, Harold “Buck” Weaver, and others cross-pollinated the artistic foment of the Old World with the palette and culture of the New World to create styles of art that were uniquely American. And another signature artist of the Southwest, Maynard Dixon, renowned for his simplified modernist images of the West, also continues to inspire.

Equally inspiring for Jonason are two seemingly disparate influences: the traditional arts and crafts of the Southwest’s native tribes, and the intricate large- and small-scaled geometric patterns that occur in nature, known as fractals. Yet, their connection quickly becomes clear in speaking to the artist about how he sees the world. “For me as a painter, it’s all about volume and shape, a reductive and simplifying process of finding the natural geometries in nature,” he says. “And that’s no different than the way Navajo weavers or Pueblo potters portrayed the natural world through geometric series of zigzags, curves, or other patterns.”

Despite drawing upon a wide variety of influences, Jonason nevertheless achieves a style entirely his own. “You can never really be like anybody else,” he says. “Whatever you do as an artist, it’s going to come out very different being your own personal creation.” And his creations distill the very essence of the region, “the Southwest of our dreams.” 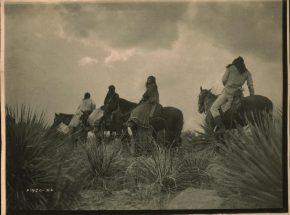