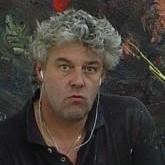 Paintings by the German artist David Stern announce themselves with the subtlety of a lion’s roar. A quick glance reveals an awesome abundance of paint: gummy impasto surfaces inches thick, rough and uneven like a tempest-torn sea. This first impression is so strong, in fact, that it is not uncommon to see no more in a Stern canvas than a swirling sea of abstraction. But with time the patient viewer will discover human bodies emerging out of the primordial goop. Stern is well aware of this delayed effect of his art. He claims that a goal of his work is to restore the human figure as a subject matter to painting, but he believes that he cannot do this without acknowledging the medium’s history, including the 20th-century detour into nonfigurative painting, which makes such a restoration necessary in the first place. In effect, Stern’s paintings reverse the experience of viewing modernist abstraction, in which a recognizable object deconstructs before its audience’s eyes.

Stern was born in Essen to a Dutch Jew and German Jew who settled in Germany after the Holocaust. He lived in Germany until 1995, when he moved to New York for a variety of reasons, most significantly his desire to live in an observant Jewish community. In the years before the move, Stern’s career had begun to take off — in the early 1990s alone, he had solo shows at the Hungarian National Gallery in Budapest and the National Jewish Museum in Washington, D.C., as well as various galleries in England, Austria and Germany. But in New York, he knew only one person. Still, Stern quickly landed on his feet, finding a studio and gallery representation at Rosenberg + Kaufman Fine Art. He has since had three solo shows at the Soho gallery. From April 28 to June 6, he will have his fourth exhibition there.

But when I visited Stern in his Chelsea studio, he spoke little of his personal history. Instead, the subject most on his mind was September 11, 2001. More than two years after the destruction of the Twin Towers, the artist is still reeling from the events of that terrible day. He talked at length about the “pain and sense of dislocation” he continues to feel, emotions that he believes shed some light on what his parents must have experienced at the end of the war. The many paintings lining the walls of Stern’s studio — those recently completed and those still in progress — all seemed to testify to the artist’s ongoing struggle with September 11.

Two series in particular told of his complex reaction. The seven paintings constituting the “Braces and Shadows” series are (with one exception) self-portraits set in Stern’s studio — the “braces” in the title refer to the thick structural supports that divide the large rectangular space into two long, narrow naves. With muted, somber colors, the artist depicts himself in a state of melancholy reflection, seated upon one of the braces as a gray shadow stretches out on the floor before him. Ostensibly, these images are about Stern’s attempt to grow comfortable in his new studio, which he moved to in January 2003, but they also capture the artist’s existential struggle with the changed world around him. It is as if they are asking: “Who created this oppressive mood, this oppressive space? And who is the caster of this dark shadow — the structural brace or the artist creator?” This last question, which goes to the heart of the artist’s personal struggle, is partially answered by the series’ lone image in which Stern does not appear. Here a woman and baby, the artist’s wife and child, stand in the foreground. Gone is the shadow; in its place flows the wife’s blue blouse, the only hint of brightness in the entire series.

Bright color is less scarce in two larger, more ambitious paintings, the artist’s most recent. Both are set in a synagogue, where a group of men stand on the bimah, gathered around an open Torah scroll. In one of the paintings, another figure, a small boy, is also present. Standing among the men, he looks up, directly at the viewer, who looks back from above, as if from the perspective of someone in the women’s gallery. In the two paintings, this is the sole face we see; the other characters present only their covered heads. As in the “Braces and Shadows” series, there is much black and white in these paintings — after all, black and white are the colors of the men’s suits, kippot and tallit as well as the open Torah scroll — but here the backgrounds of both images explode with primary colors. Behind the upward-looking boy is a rich, cardinal red; in the other painting, the background is a deep, soulful blue. Painted in Stern’s signature impasto, both backgrounds are lush, textured and highly emotive.

The synagogue paintings are culminations of two long-standing Stern projects. First, they complete a conceptual triptych, which traces the public, rather than the artist’s private, response to September 11. The “Gathering” series, as Stern calls the seven-canvas grouping, explores the concept of ritual and the role it plays in restoring one’s faith after tragedy. In addition to the synagogue images, which are supposed to represent Rosh Hashanah services from 2001, it includes two paintings of a Native American powwow that Stern saw the weekend before September 11 at a reservation in Maine, and three canvases depicting the spontaneous, informal vigils that sprung up around New York in the immediate aftermath of September 11, which Stern witnessed as he wandered the city streets that September and October, unable to paint.

But perhaps more important, these two synagogue paintings represent the first time Stern has ever painted scenes of the Jewish community, though he has been considering doing so for 15 years. He titled the two paintings “Ten and One,” an obvious allusion to the minyan, but perhaps also an indication of the great personal value of these works. And yet Stern, an Orthodox Jew who was born into a secular family and has grown increasingly religious over the years, surprisingly downplayed any suggestion of the paintings’ importance. Developments in his formal ability as a painter were what finally allowed him to compose them, he argued, not any new ambition or spiritual project.

I suspect that someday Stern will change his mind about this — that he will look back and see these two works as career-transforming not simply in formal terms — but only time will tell which of us is correct. At the very least, the process of making the synagogue images does seem to have brought to an end Stern’s post-September 11 mourning. As if signaling that such a turning point was indeed underway, Stern’s work-in-progress at the time of my visit was initially intended as a further synagogue painting, but has since been transformed into a more mundane gathering: a group of people ascending a staircase. But just as abstract expressionism is contained in his figuration, one senses that the shadow of September 11 will never disappear fully from Stern’s work. As this exciting artist begins a new stage in his career, one feels confident that his restored human figure will forever carry the mark of that day two years ago — in the form of a restored human soul.