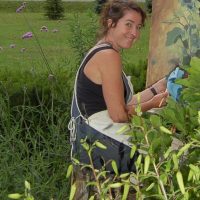 Dawn Stafford is a full time artist who lives and paints in West Michigan. In 2005 she opened The Peachbelt Studio and Gallery, her private painting studio and seasonal gallery, located in a restored iconic little red brick one-room schoolhouse (ca 1867) in Fennville MI formerly known as the Peachbelt Schoolhouse. Her use of color and composition reflect a connection with rural environments and her personal family history. Originally from New York, she received her BFA from Swain School of Design in Massachusetts before moving to Michigan in 1992.

The “Lake Diary” series was painted between the months of October and late March. A time during which the face of the Lake Michigan is turned by cold winds and the coastlline covered to some degree with ice. Many of the days I visited with my paints the physical impact of the waves crashing against the frozen coastline would shake the ground drawing the air off the shore with each retreat. Other days the air would quietly breathe itself. The paintings are intended to personify the ever changing character of the lake in wintertime. Like a diary entry the date and hour each painting was started is recorded on the back of the canvas. 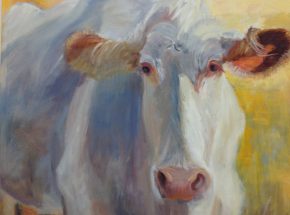