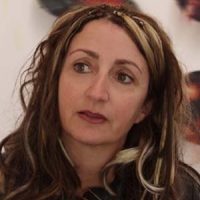 Born and raised in Hackensack, Deborah Oropallo was exposed to the New York art scene of the 1960’s. At a young age, she was inspired by Pop Art by the likes ofAndy Warhol, Jasper Johns, and Robert Rauschenberg. Looking at the work of these pioneers, she fast became aware of the significant influence that photography had on contemporary art. She attended Alfred University in New York for her bachelor’s degree, and went on to pursue her graduate studies at Berkeley, where she studied under the venerated painter Elmer Bischoff. Since receiving her M.A. and M.F.A in 1983, she has won numerous prestigious awards such as the National Endowment for the Arts (1991), the Modern Masters Award (1998), and the Pollock-Krasner Foundation Award (2005).

Oropallo’s works are included in numerous museum collections including the San Francisco Museum of Modern Art, the Whitney Museum of American Art and the Museum of Fine Arts, Boston. A solo exhibition of her Guise series was mounted at the deYoung Museum in 2008.