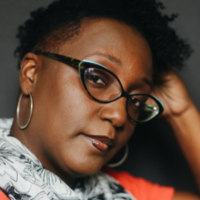 Throughout history, the marginalization of Black women has led to problematic representations of their roles within community and family structures, as well as problematic visual and textual representations; thus making it difficult to document their positive contributions within collective systems. Martin’s current work deals with reconstructing the identity of Black women by piecing together the signs, symbols, and language found in what could be called everyday life from slavery through modern times. Martin’s goal is to create images as a visual language to tell the story of women that have often been marginalized, offering a different perspective of the lives of Black women.

Delita Martin is an artist currently based in Huffman, Texas. She received a BFA in drawing from Texas Southern University and a MFA in printmaking from Purdue University. Formally a member of the fine arts faculty at the University of Arkansas at Little Rock, Martin is currently works as a full-time artist in her studio, Black Box Press. Martin’s work has been exhibited both nationally and internationally. Most recently Martin’s work was included in the State of the Arts: Discovering American Art Now, an exhibition that included 101 artist from around the United States. Her work is included in numerous portfolios and collections.