Dennis Francesconi was 17 years old when he broke his neck in a water skiing accident. This injury left him paralyzed from the chest down.

A few years later during his rehabilitation, he met his future wife, Kristi. Kristi encouraged Dennis to find an outlet to express his emotions. He chose writing, which began as a need to write his name and to recapture his identity. “I grew tired of being known as ‘X’ which was all I could scribble with a pen wedged between my fingers. So one day, in an act of frustration, I grabbed the pen between my teeth and just wrote my name,” said Dennis.

Writing then turned into doodling, and over time, his talent developed. Dennis became an MPFA student artist in 1993, when a chance meeting with a fellow MFPA artist led him to apply to the Association.

As his talent progressed, he took on more difficult art subjects and experimented with untraditional paint media. In 1999, when Dennis was promoted to a full member MFPA artist, he was able to fulfill his lifelong dream of coming off Social Security support.

Dennis has participated in about 70 exhibitions, which include shows in Los Angeles, New York, Chicago, and Atlanta, as well as Europe, Asia, and Australia. He currently lives in Madera, California and attributes much of his success to the MFPA. 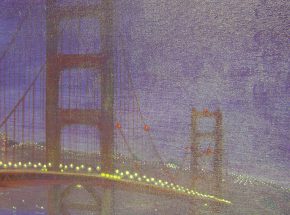