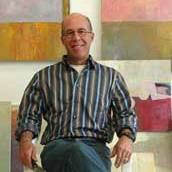 Lifelong painter Dennis Hartley was born and raised in Southern California, eventually moving to the Northwest in 1977. Over the last thirty years, he has worn the hats of architect, designer, and builder. He received his degree in architecture from Arizona State University in 1972, and has been a registered architect since 1976. Early in his architectural career, he lived and worked in Paris and Lausanne, Switzerland. His work as a furniture designer has been represented by major galleries and showrooms from coast to coast, as well as exhibited at the International Furniture Fair in New York City. In 1998 he put aside other professional pursuits in order to paint full time. In addition to Kent, Connecticut, he is currently represented by fine art galleries in his home state of Oregon, and Santa Fe, New Mexico.

Hartley’s media include both acrylic and oil on canvas. His work often straddles the line between representational and abstract, incorporating ideas from ancient Chinese painting as well as from Western modernist movements of the twentieth century. He explains:
“My most fundamental influence continues to be ideas inherent in Taoist and later Buddhist philosophy and reflected in ancient Chinese painting: duality/non-duality, depiction of time and space, and the iconography of what is historically called “man and nature.”