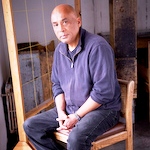 Denzil Hurley was born in Barbados, West Indies. He studied at the Portland Museum Art School (B.F.A. 1975) and Yale School of Art (M.F.A. 1979). Hurley has received a Guggenheim Fellowship (1980), grants from the National Endowment for the Arts (1989, 1993), and a Pollock-Krasner Fellowship (1989). His work was featured in a two-person show at Southern Methodist University (Dallas, TX, 1998) and a solo show at the Kemper Museum of Contemporary Art (Kansas City, MO, 2004). Hurley’s work has been included in numerous group exhibitions including Short Stories at the Henry Art Gallery (University of Washington, Seattle, WA, 2001), American Academy Invitational Exhibition of Painting and Sculpture (American Academy of Arts and Letters, New York, NY, 2002), and International Abstraction (Seattle Art Museum, Seattle, WA, 2003-04).

Denzil Hurley’s paintings reflect the way he works adding and removing layers of paint, building up and reaching back into the painting, creating through subtle variations of texture and color a history of activity that is the work itself. The 2006 February show, consisting of fifteen to eighteen oil paintings in a variety of sizes, was Hurley’s first solo exhibition with the gallery.

The Kemper Museum of Contemporary Art in Kansas City, MO mounted an exhibition of his paintings in 2004. Hurley’s work has also been included in Short Stories at the Henry Art Gallery (2001), American Academy Invitational Exhibition of Painting and Sculpture at The American Academy of Arts and Letters, New York (2002), and International Abstraction at the Seattle Art Museum (2003-04).