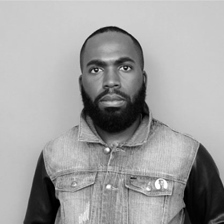 Derrick Adams is a multidisciplinary New York–based artist with practices rooted in Deconstructivist philosophies and the formation and perception of ideals attached to objects, colors, textures, symbols and ideologies.

Focus is on fragmentation and manipulation of structure and surface – exploring shape-shifting forces of popular culture and its counter balances in our lives.

Creative process is invested in ideas charging formal constructs working in 2D, 3D and performative realms. Medium works its own favor as a formal language, communicating and exploring ideas of self image and forward projection.

Learning functions as both subject and object, deriving from impressionable experiences associated with iconography from American culture, television programming and interest in the institutional critique of cultural perspectives in contemporary art.

Shedding light on persuasive, performative and often duplicitous identities, as well as on architectural objects and history, the work explores the relationship between man and monument as they coexist in the landscape as representations of one another.

The collage works on paper create minimal geometric constructions of angular human figures that seemingly live both in a state of deconstruction at the same time as if in the process of being built.

Architectural processes and their different presentation strategies are important in the work: footprints, floor plans, elevation sections, visual renderings and the constructed object, act as various developmental states and approaches and serve as a comparative investigation into the physical construction of the figure.

Adams received his MFA from Columbia University and BFA from Pratt Institute and is a Skowhegan and Marie Walsh Sharpe alumnus. He is a recipient of a 2009 Louis Comfort Tiffany Award, and is an honored finalist for the 2011 William H. Johnson Prize.

Upcoming exhibitions and performances include Radical Presence: Black Performance in Contemporary Art, as well as The Shadows Took Shape, both at The Studio Museum in Harlem, 2013; a performance project at Salon 94, New York, in collaboration with the Calder Foundation for Performa ’13; and a solo exhibition at Hales Gallery, London, 2013.