DeWitt Clinton Boutelle, namesake of the then Governor of New York, DeWitt Clinton, was a native of Troy, NY. Although influenced by Thomas Cole and Asher Durand, he was largely self-taught. In honor of Cole, he produced a full-sized, meticulous copy of Cole’s Voyage of Life.

He was elected an Associate of the National Academy of Design in 1853 and a member of the Pennsylvania Academy of the Fine Arts in 1862. He changed his residence on several occasions, living at various times in Troy, New York City, and Basking Ridge, NJ, before moving to Philadelphia and finally Bethlehem, PA.

Boutelle exhibited widely at the Boston Athenaeum in the 1850s and at the Pennsylvania Academy of the Fine Arts and the National Academy of Design from 1862 to 1874. 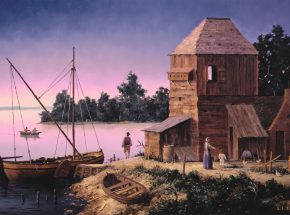