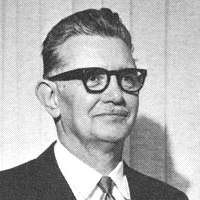 Dominick Labino is a seminal figure in the studio glass movement. He was a Renaissance man trained as an engineer at the Carnegie Institute of Technology. His design sense as an artist was nourished at the Toledo Museum’s Art School. His work in the glass industry spanned more than fifty years involving science, history, art , technology and studio practices. He was employed at the Johns-Manville and in charge of research and development. Labino held more than fifty patents for glass in America and more than twice as many abroad. Moreover, in 1954 he invented a pure silica fiber used in 1980 for the protective shields for the spacecraft Columbia. In terms of his art glass, he is probably best known for cast panels of large polychrome murals made in 1969 owned and displayed at the Toledo Museum of Art. In 1962 he participated with Harvey Littleton in famous glassblowing workshops that took place at the Toledo Museum . These workshops that Labino supplied with no. 475 marbles that he had invented at Johns- Mansville Corporation (a glass formula with low-melting properties) quite literally started the studio glass movement in America.