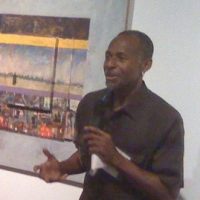 As richly layered as any jazz composition, Donald A. Boudreaux’s images are rendered with a combination of abstract and figurative constructions, overlapping geometric forms and symbolism – all juxtaposed against subtle and emerging figures. The warm, and often intense colors of his palette speak not only of passion, but also of the festival of life found in his native Louisiana and African ancestry.

Donald has taught in schools and museums. His work has been featured in one man and group shows at venues including; the Augusta Savage Gallery, The New Britain Museum of Art and the Contemporary Arts Center in New Orleans. His work appeared at the U.S. Embassy in Maseru, Lesotho, through 2007.