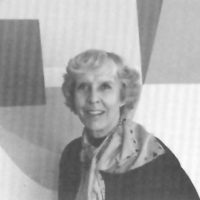 Painter and printmaker Dorothy Stratton King (1909-2007) was a founding member of the Washington Printmakers Gallery.

Mrs. Stratton King’s intaglio prints and her paintings have hung on the walls of the World Bank, the Tunisian Ministry of Culture, the Pushkin Museum of Fine Arts in Russia, the Long Beach Museum of Art and U.S. embassies through the Arts in Embassies program. Her works also are part of numerous private collections in the United States and abroad, as well as the Georgetown University Fine Print Collection, the Corcoran Gallery of Art and the National Museum of Women in the Arts in Washington, DC.

She was born in Worchester, Mass., grew up in Sharon, Mass., and showed a talent for art as a young child. After marrying in 1928 and moving to Brooklyn, N.Y., she studied figure drawing and painting at the Pratt Institute and took classes at the Brooklyn Museum School in drawing and painting with artist Alexander Brook.

In 1944, she and her husband divorced, and she moved to Los Angeles, where her first job was at Warner Brothers painting “Tom and Jerry” cartoon cells. She next worked in Hollywood, designing costumes and dressing puppets for George Pal’s “Puppetoons.” While there, she met the director of animation, William Asbury King. They married in 1948 and spent the next 1-1/2 years in Paris, where Mrs. King studied painting with cubist and sculptor Andre Lhote at the Academy de la Grande Chaumiere.

After returning to Los Angeles, her increasingly vivid abstract expressionist paintings gained attention. She studied at the University of California at Los Angeles and had her first major one-woman show at the Pasadena Museum of Art in 1959. By the mid 1960s, she was living in La Jolla, Calif., and was registrar for the La Jolla Museum of Contemporary Art School. Her increasing interest in printmaking led to classes at the University of California at San Diego given by printmaker Paul Lingren.

After her husband’s death in 1990, Mrs. King returned to San Diego, where a retrospective of her work was organized in 1994 at the University of San Diego’s Founders Gallery. She moved back to Northern Virginia about 1996.

[Modernists have influenced her work,] “But over the years she has wrought her own special, rather brooding and gestural style on them to come up with something that is unmistakably hers… At her best, Stratton’s pictures convey a great deal of movement; a sense of sprawling from the center with suppressed energy.” — Michael Welzenbach, review, The Washington Post, 1992
&mdash Obituary from The Washington Post, 2007