American artist American Doug Hall is exhibiting documentation of his installation The Terrible Uncertainty of the Thing Described. The work uses a Tesla coil. Nikola Tesla was an early Serbian immigrant to the United State where he initially worked with Edison before starting a lab of his own and eventually settling in New York City. http://doughallstudio.com/ 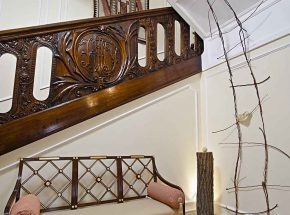