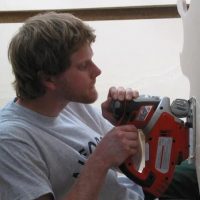 When I was 11 years old I moved to Madrid Spain, where I immediately fell in love with graffiti art; its untamed gestures, rebellious nature and vibrant colors. I became obsessed with dissecting its significance both visually and conceptually. These analytical deconstructions eventually lead to the desire to physically deconstruct its form. As an undergraduate at Stetson University, I used the idea of deconstruction to develop a distinctive artistic technique that I called “aslant art”. Each body of work is composed of several individual pieces that are cut using a jig-saw. The pieces are then uniquely angled and projected from the viewing plane using wooden dowels giving the work its dimension. Some of the pieces fit precisely together while others are overlapped one on top of another. Each piece is then painted to develop a sense of roundedness and body further enhancing the illusion of dimension. The viewer’s perception becomes altered at a distance because the overall composition appears full and solid however; the sculpture is essentially flat and littered with empty space. As a result, the work of art breathes between the individual pieces casting away confinement and giving a sense of liberation. The viewer’s perception is further distorted upon close inspection as some of the pieces do not overlap but are painted to appear this way. The viewer can become confused by the reality of the object’s dimension and the painted representation of the object’s dimension. Aslant art is unique in its presentation and due to its dimension can cast a wide range of shadowing effects depending on the positioning of light. Although the work I create now does not directly relate to graffiti art, I owe homage to its form as inspiration for my expression.