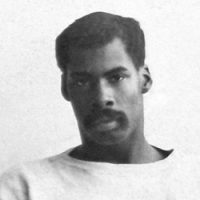 Born in 1937 ,in the Watts area of Los Angeles, CA. Bereal was a key figure in the Los Angeles Art scene of the early 60’s funded by the patronage of Denis Hopper and Dean Stockwell plus the support the of visionary galleries such as the Ferus Gallery.

In his early assemblages, Bereal brought together elements from an American context with foreign and insidious symbols in a prodigious critique of the country’s foreign policy and social development. In American Beauty from 1965, a withering tree is shown growing from a cracked foundation, painted over with the Iron Cross and a swastika with obvious attributes of the star-spangled banner.

Having been personally involved in the Watts riots of 1965–66, Bereal chose to distance himself for a while from the art world. Since 1968, Ed Bereal has been actively engaged in teaching art at several universities, but in 2007 resigned his position as Professor Emeritus at Western Washington University to devote himself exclusively to his artistic career.