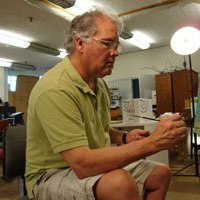 Ed Shay was born in Boston, Massachusetts and grew up in Sudbury, a suburb of Boston. After completing his BFA in 1965 at Murray State University, KY, and his MFA at the University of Illinois in 1971, he taught for four years at Bell State University in Muncie, IN. In 1975 he moved with his wife and painting collaborator, Charlotte Rollman, to New York, where they worked in a studio loft in what is now the Dumbo area of Brooklyn. They returned to the Midwest in 1977 and Ed took a teaching position at Southern Illinois University at Carbondale in 1978. They divorced in 1984 and Ed married the composer, Kathleen Ginther, in 1988. They have one daughter, Marina, who was born in 1990.

Ed’s work has centered on watercolors, oils, and cast bronze sculpture. He has had various gallery affiliations over the past four decades, most recently with Roy Boyd Gallery in Chicago, IL. Despite a long history of exhibitions, for the past ten years he has represented himself and only rarely exhibited, working mostly on carefully chosen commissions.