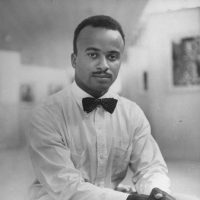 Born in Richmond, Virginia, Eldzier Cortor grew up on Chicago’s South Side. His formal education began at the School of the Art Institute of Chicago, Illinois and continued under Laszlo Moholy-Nagy at Chicago’s Institute of Design, Columbia University, New York City (with a concentration in lithography), and the Pratt Graphic Art Center, New York City.

During the 1930s, Cortor was employed by the Works Progress Administration (WPA) Federal Arts Project and taught classes at Chicago’s South Side Community Art Center. He received two successive Rosenwald Grants in 1944 and 1945 that enabled him to travel to the Sea Islands off the Southern coast where he came to know the culture of the Gullah community*, the women of which he often painted with long, elegant necks and colorful head scarves.

In 1946, Cortor achieved popular recognition when LIFE magazine published one of his semi-nude female figures. Funded by a Guggenheim Fellowship in 1949, Cortor traveled to the West Indies to paint in Jamaica, Cuba, and Haiti, where he remained for two years.

Cortor is known for his graceful depictions of black women influenced by African sculpture, nineteenth-century French painting, and his travels to the Sea Islands and West Indies. For over sixty years, regardless of trends, Cortor has focused his work – paintings, drawings and prints – on what he calls the “classical composition:” the solemn heads and elegant figures of black women. Although in recent years, his work has become more biographical, often reflecting his past. Cortor continues to live and work in New York City.