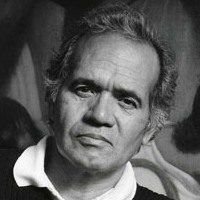 Elias Rivera was born in New York City. In 1982, he moved to Santa Fe and quickly established himself as an internationally acclaimed painter. In his paintings, Rivera explores the colorful costumes and street life of the native populations of Santa Fe, New Mexico; Guatemala, Mexico and Peru. He has earned widespread recognition for a New Mexico series of paintings entitled “Under the Portal,” and international recognition for his Guatemala Series. Over the years, his generosity has supported many Santa Fe non-profits through the donation of dozens of paintings. In 2004, Rivera received the Governor’s Award for Excellence in the Arts and in 2005 he was named the Artist of the Year by the Santa Fe Rotary Foundation. Rivera’s works have been exhibited at the New Mexico Museum of Art, the National Hispanic Cultural Center, the Albuquerque Museum, the American Academy and Institute for Arts and Letters, the Nevada Institute of Contemporary Art, the Center for Contemporary Art, the Brooklyn Museum, the National Academy, the Northrup Gallery and the University of Minnesota.