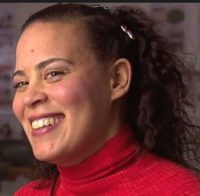 Gallagher lives and works in Rotterdam, The Netherlands and New York City.

In Watery Ecstatic: “classical” type of drawings, watercolours – and collage – of marine creatures. This series is at the border between scientific drawings of submarine life – it seems to document, to present a catalogue of her complex universe – and child pastel drawings. Elegant, poetic, soft even after the anger of some other works. ?????
These creatures are descendants of slaves, thrown out of boats. Ellen Gallagher makes them fish and gives them a whole new existence. At the bottom of the sea.
?http://whatart33.blogspot.com/2013/08/aquatic-ecstasy-ellen-gallagher.html