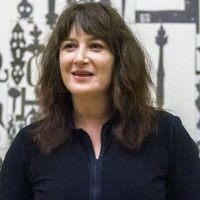 Ellen Harvey works in a variety of media, including painting, installation, and performance, and her work almost always references and critiques the conventions of the art world. Indeed her work forces her viewers to contemplate long-held traditions that are so ingrained as to be taken for granted. In her Mirror Ball (Interior), for example, she depicts a photographic self-portrait in which the artist and subject is obscured both by the photographic tool (the flash of the camera) and the odd shape of the medium (the mirrored ball). With this piece, Harvey makes a profound statement about the inherent problem of self-portraiture- one is invariably unable to present a straightforward and unbiased view of oneself.

A native of Kent, England, Harvey earned her Bachelor of Arts and Master of Arts degrees from Harvard University, and later received a law degree from Yale University in 1993. In 1999, she participated in the Whitney Museum of American Art’s Independent Study Program. She has exhibited extensively around the United States and Europe and has received numerous awards. Her work can be found in collections around the world, including the Whitney Museum of American Art in New York and the Gwangju Art Museum in Korea.