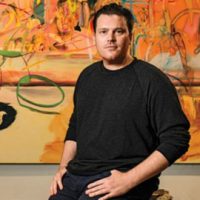 Elliott Hundley draws inspiration for his paintings from diverse sources, but especially from his Southern heritage, steeped in family history. Many of his works also contain references to Greek tragedy and classical mythology, and to Japanese woodblock prints. He also stages improvisational photo shoots to generate imagery for his multi-panel tableaus, casting friends and family in roles from antiquity and various other sources. With these and other images anchored by thousands of pins to bulletin-board-like surfaces, his shallow reliefs form a palimpsest that teems with humble materials such as cut-up magazines, string, plastic, gold leaf, and other ephemera. He frequently recycles leftover scraps from one work to the next and uses images of completed paintings as substructures for new projects, creating continuity between old and new.