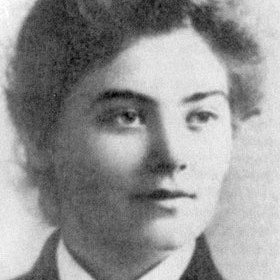 Canadian Artist and Writer: Emily Carr studied in San Francisco in 1889-95, and in 1899 she travelled to England, where she was involved with the St. Ives group and with Hubert von Herkomer’s private school.

She lived in France in 1910 where the work of the Fauves influenced the colourism of her work and she came into contact with Frances Hodgkins. Discouraged by her lack of artistic success, she returned to Victoria where she came close to giving up art altogether.

However, her contact with the Group of Seven in 1930 resurrected her interest in art, and throughout the 1930s she specialized in scenes from the lives and rituals of Native Americans. She also showed her awareness of Canadian native culture through a number of works representing the British Columbian rainforest. She lived among the native Americans to research her subjects. Many of her Expressionistic paintings represent totem poles and other artefacts of Indian culture.