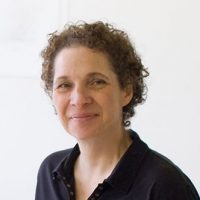 Emily Eveleth has pursued the ironic and expressive potential of her signature image, the ordinary and ubiquitous jelly doughnut. Eliminating the boundaries between genres, she invests her subject with unexpected presence and identity – from monumentality to pathos, vulnerability, sensuality and humor. Locating the sublime in this humble subject Eveleth makes it function simultaneously as portrait, landscape, and object of projected desire. Her painting and drawing techniques invite a broad range of art historical associations. Gesture and content engage the viewer, forming a covert exchange between object and onlooker. There is neither uniformity in spatial relationships nor static emotional content in Eveleth’s paintings. Rather, they contain a wealth of feeling-melancholy, the wry humor of recognition, the insecurity of darkness and the opposing innocence of paradisial light. – Alexandra Woodworth

Emily Eveleth shows regularly at Danese in New York (www.danese.com) and the Howard Yezerski Gallery in Boston. Her paintings and drawings have been widely shown and have most recently been seen at the Smith College Museum of Art in a 10 year survey of the doughnut series. Her work will be featured at The Sheldon Museum of Art in Lincoln, NE in “Poetical Fire: Three Centuries of Still Lifes” in 2011 and was recently shown at the Fresno Metropolitan Museum, Fresno, CA, the Brattleboro Museum, Brattleboro, VT, the Katonah Museum of Art, Katonah, NY, and the Parrish Art Museum in Southampton, NY. Her paintings can be found in private and public collections including the Museum of Fine Arts, Boston. It has been written about in Bomb Magazine, Art in America, the New Yorker, and the New York Times and was profiled in 2010 in the Boston Globe by Sebastian Smee. In 2002 she was a Visiting Artist at the American Academy in Rome and her painting “Nigh” was shown in an exhibition at the Copenhagen residence of Stuart Bernstien, the United State Ambassor to Denmark.