I was born and raised in New York City and have never lived ouside of its borders. New York has given me a rich and varied background of cultural and visual experiences and I can’t imagine living anywhere else.

I graduated from Queens College of the City University of New York in 1978 with a BA in English Literature. I immediately began working for a Brooklyn manufacturing company, eventually becoming an administrative manager. But throughout my 17 year tenure at my “day job” I always found avenues of creative outlets.

While I was still in college I began a lifelong interest in photography and set up a darkroom in my parents’ basement. And for a long period of time I attended classes in lapidary, jewelry making, and silversmithing at the Craft Students League in Manhattan.

In late 1987 I was browsing through a catalog from the New School and noticed a class they were cosponsoring in glass blowing at the New York Experimental Glass Workshop. I thought I’d give it a try. So in February, 1988 I made my way to Mulberry Street in Little Italy and took the first of what was to become a long run of glass making classes.

When in 1991 the Glass Workshop (now known as UrbanGlass) moved to its new quarters at the former Strand Theater in downtown Brooklyn I followed right along. In 1995 I moved to Park Slope, Brooklyn to be in closer proximity to the studios at UrbanGlass, and at the end of that year I left my “day job” to devote all my time to creating glass art and objects. The seduction was complete.

Though I have studied most disciplines of glass making including kiln forming, casting, and lamp working, it was glass blowing that I kept returning to and have been primarily working with for the past 14 years. There is something intriguing about glass blowing. It requires a concentration that I can’t seem to muster for anything else. When I’m at the bench, I have no choice but to give my complete and total attention to the piece I’m working on. There is an immediacy and edginess in balancing molten glass on the end of a steel pipe, and intense satisfaction in then transforming it into an object of functionality or beauty or both.

I am fascinated by the inherent properties and characteristics of glass. The variations and combinations of colors allow infinite possibilities. The ability to permanently suspend imagery and objects within the walls of a vessel is magical. The transmission of light and the nuances of shading and shadows can create depth and dimension unattainable in any other medium.

One of my goals is to convey to the viewer the sense of awe and exhilaration that I experience when I create a glass object. I often consider myself the luckiest person on the planet to have found my passion and work with it every day. 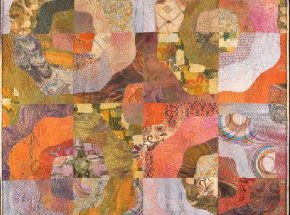