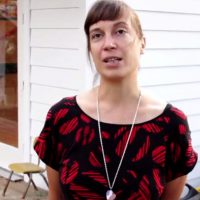 Erin Curtis is an artist living and working in Austin, Texas. She creates paintings, large-scale site-specific installations and public art projects. Her work explores abstraction, repetition and ornamentation and their historical roots in weaving, architecture, and body ornamentation. The Dallas Museum of Art, the Andy Warhol Foundation, the City of Austin and the District of Columbia have supported her work through grants. Recently, Curtis had solo exhibitions at Conduit Gallery, Dallas, Texas (2017) California Polytechnic State University in San Luis Obispo, California (2016), Big Medium Gallery in Austin, Texas (2015) and Flashpoint Gallery (2015) in Washington, DC. In the past two years, she was commissioned to created works for Facebook Austin, the Chicago Transit Authority, the City of Washington, D.C and the City of Alexandria, Virginia. She attended the Skowhegan School of Painting and Sculpture in 2010 and was awarded fully funded residencies at Anderson Ranch (2012) and Vermont Studio Center (2014). In 2008-2009, Curtis was a Fulbright Scholar in Jaipur, Rajasthan. Curtis graduated from Williams College with a BA in Liberal Arts in 1999 and received her MFA from the University of Texas at Austin in 2007.