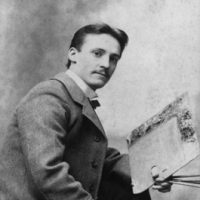 Blumenschein was born in Pittsburgh, and raised in Dayton, OH, the son of an accomplished professional musician. Though his early training was in music, his artistic talents led him to enroll in the Art Student’s League in New York City in 1892. By 1894 he was studying at the Academie Julien in Paris, France, with fellow Americans Bert Phillips, Eanger Irving Couse, and Joseph Henry Sharp, who were to be his friends and colleagues for life.

In 1896 he began a very successful career in New York City as a periodical and book illustrator. His first trip to the Southwest was made in 1897, and a year later he and Bert Phillips spent the summer in Taos, New Mexico, the only professional painters working there at the time. Phillips settled in Taos; Blumenschein returned to New York. Blumenschein resumed studies in Paris in 1899, and lived there until 1909.

In Paris he met and married American artist Mary Shepherd Greene. Upon their return to New York, both taught at the Pratt Institute and he also joined the faculty of the Art Students League. By 1910 he had been elected an Associate Member of the National Academy of Design, and was devoting nine months of the year to commercial art in New York and three months to his own work in Taos. In 1912 he helped form the Taos Society of Artists. When he and Mary settled permanently in Taos in 1919, he broke all ties to his commercial career.

Blumenschein won almost every major honor awarded artists in the United States. He was elected a full member of the National Academy of Design in 1927, he was honored in 1948 with the first retrospective exhibition ever held at the Museum of New Mexico in Santa Fe, and his work continued to be exhibited and acclaimed in the United States, Europe, and South America.