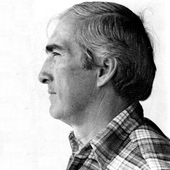 Born in Pintag, Ecuador, Estuardo Maldonado is considered to be a master Latin American sculptor and painter inspired by the Constructivist Movement. Maldonado’s international presence is largely due to his participation in over a hundred exhibits outside Ecuador. His work has a universal quality that speaks to expansive audiences.

Maldonado left home at a young age in order to observe and learn from nature. Both nature and the indigenous themes have been a fundamental inspiration for much of his work. After studying art at the School of Fine Arts in Guayaquil, Maldonado began teaching drawing and art history at the American School of Guayaquil. In 1955, Maldonado traveled the Ecuadorian coast painting the people of the coast and landscapes and held his first exhibitions in Guayaquil, Portoviejo, and Esmereldas. One year later, Benjamin Carrion invited Maldonado to exhibit at the House of Ecuadorian Culture, making him the first Ecuadorian artist to exhibit sculpture in Quito and Guayaquil. In 1957, Maldonado set out for Europe on a scholarship and traveled to France, Germany, Switzerland, and Holland and settled in Rome, Italy. Maldonado attended the Academy of Fine Arts of Rome and the Academy of San Giacomo.

Maldonado’s work depicts abstractions of nature. His ancestral roots are also evident in some of his works based on Pre-Colombian imagery from his native Andean zone. At the same time, he is interested in the palpitation of the evolving Universe. It is because of this inherent curiosity with advancement and history that he has a place within the Latin American Constructivist art movement. Maldonado’s work has been celebrated throughout the world for successfully combining nature with innovation while addressing the relationship to his Andean roots.