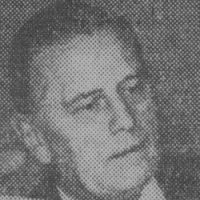 A painter, designer, cartoonist, illustrator, teacher and lecturer, Eugene Matthew Dyczkowski (1899-1987) was born on May 1, 1899 in a Philadelphia, Pennsylvania. He was known to have lived in Buffalo and Grand Island, New York. He studied art with Eugene Zimmerman (“Zim”), the noted American cartoonist, through a correspondence course, at the Albright Art School, Buffalo, NY and with John Rummell, Arthur Lee, and Eliot O’Hara at the Buffalo School of Fine Arts.

He exhibited at the Buffalo Society of Artists, at the 1929 World’s Fair in Posen, Poland, at the Rockport Art Association Memorial Art Gallery, at the Buffalo Society of Artists 1924-1955, at The Patteran, Buffalo, NY 1946, Rochester, NY, at the Albright Art Gallery 1935-1946 (solo 1944, traveling exhibition 1946), at the Kosciuszko Foundation, New York City, at the Polish-American Artists Exhibition , New York 1948 (prize), and at the Old Fort Niagara Association 1953. Also numerous other Polish-American Group Exhibitions in Buffalo, Chicago, Cleveland, Washington, DC, and Syracuse, NY, and the Albright-Knox Museum, Buffalo, NY, solo exhibition 1944.

Dyczkowski was the Educational Director at the Albright Art Gallery, Buffalo, NY. He developed art lectures for radio broadcast. He once entered a deliberately incompetent painting, signed “Noga Malawane” (painted with feet) to prove the incompetence of a jury selecting works for Western New York exhibitions. In 1933, as a WPA artist, he began producing murals for schools and state offices. He turned to abstract painting in the 1950s, and was actively involved in the national and local art communities.