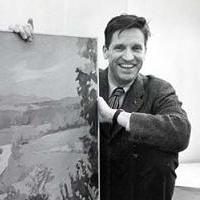 Fairfield Porter was an American painter and art critic. He was the brother of photographer Eliot Porter and the brother-in-law of federal Reclamation Commissioner Michael W. Straus.

Though educated at Harvard, he was largely self-taught, and produced representational work in the midst of the Abstract Expressionist movement.

His subjects were primarily landscapes, domestic interiors and portraits of family, friends and fellow artists, many of them affiliated with the New York School of writers, including John Ashbery, Frank O’Hara, and James Schuyler. Many of his paintings were set in or around the family summer house on Great Spruce Head Island, Maineand the family home at 49 South Main Street, Southhampton, New York.

His painterly vision which encompassed a fascination with nature and the ability to reveal extraordinariness in ordinary life was heavily indebted to the French painters Pierre Bonnard and Edouard Vuillard. He said once, “When I paint, I think that what would satisfy me is to express what Bonnard said Renoir told him: make everything more beautiful.”

Fairfield Porter was a more reticent realist, and with no link to Abstract Expressionism. He was largely self-taught. From the mid-1950s on he stayed away from Manhattan, preferring to paint on Long Island and on Great Spruce Head Island in Maine, which his family owned. This didn’t put him out of touch with “the scene” – Porter was a gifted and lucid art critic as well as a painter – but he needed to be in constant touch with his motifs, especially American light and the still expanses of coastal field and sea. Porter rejected the piety that the empirically painted figure or landscape was dead. It simply didn’t accord with his deepest convictions about how art relates to experience and conveys its “density” – a favorite word of his.

– From Robert Hughes, “American Visions: The Epic History of Art in America”